Of course you do, we all do.

In 3rd John, there is a key to better health that few people know about.

We’ve proven it many times at our seminars.

Click on the video and start your journey to better health.

Now I want to hear from you

Have you been supernaturally healed? Just leave your testimony in the box below. 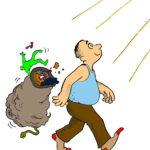 Do you or a friend need a healing miracle?

Click here to join me in a video prayer that will release the power of God into your body and mind.

Would you like to meet with me personally to discuss areas in your life where you feel stuck?

I am able to make a very limited number of online or phone appointments. If you want help living a transformed life, just click here for more information.

I’ll talk to you next week,

PS: Would you like to become a prayer partner with our ministry and get regular updates? Click here to join our prayer team.